In late 2016, The University of Tokyo, the University of Tsukuba, and Fujitsu Limited announced that the Oakforest-PACS supercomputer, built by Fujitsu and operated by the Joint Center for Advanced High Performance Computing (JCAHPC), officially became the highest performing supercomputer in Japan.

The video below shows the supercomputer being installed in the Information Technology Center on the University of Tokyo’s Kashiwa Campus. In just over 5 minutes, watch as the workers fill the near empty room with the 70 liquid cooled racks. 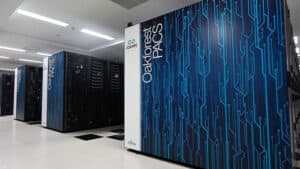 Display on Oakforest PACS at ISC