Making it Easy to Introduce Liquid Cooling to the Data Center

With the release of high wattage processors like the latest Intel® Xeon Phi™ CPU/GPGPU coprocessor, NVIDIA® Tesla® P100 GPU and the “Skylake” series of CPUs, liquid cooling is becoming a necessity for HPC data centers.

Liquid cooling’s ability to provide the direct removal of heat from these high wattage components within the servers is well established. However, there are sometimes concerns from facilities management that need to be addressed prior to liquid cooling’s introduction to the data center. In particular, there may be concerns about running water to each and every rack. Or perhaps a fear of changing the physical layout of the racks. Thankfully, Asetek’s range of data center solutions provide heat rejection flexibility for facility teams making the transition to liquid cooling.

Asetek’s spectrum of solutions allow data centers to leverage existing HVAC, CRAC and CRAH units with no changes to data center cooling infrastructure as well as full heat removal through a liquid-to-liquid path and dry coolers. In cases where budget limitations are paramount or in a transitional data center (a mix of low density air cooled & high wattage liquid cooled racks), Asetek ServerLSL™ (Server Level Sealed Loop) is ideal. ServerLSL replaces less efficient air coolers with liquid coolers and exhausts 100% of this hot air into the data center with the overall data center heat being handled by existing CRACs and chillers with no changes to the infrastructure.

Most HPC sites are (or will be) moving to entirely high density & high wattage racks in search for the highest HPC performance.   In these cases, Asetek’s RackCDU™ provides the answer both at the node level and for the facility overall. As with ServerLSL, RackCDU D2C (Direct-to-Chip) utilizes redundant pumps/cold plates atop server CPUs & GPUs (and optionally other high wattage components like memory). They collect heat and move it via a sealed liquid path to heat exchangers in the RackCDU for transfer into facilities water. RackCDU D2C captures between 60% and 80% of server heat into liquid, reducing data center cooling costs by over 50% and allowing 2.5x-5x increases in data center server density.

The remaining heat in the data center air is removed by existing HVAC systems in this hybrid liquid/air approach.  When there is unused cooling capacity available, data centers may choose to cool facilities water coming from the RackCDU with existing CRAC and cooling towers. Most sites, however, add additional cooling capacity when expanding and choose low cost dry coolers to cool the water rather than buying additional (and far more expensive) CRAC and CRAH units.  Because the high wattage components in the severs can be cooled with hot water, dry coolers are another alternative to sufficiently remove the liquid from Asetek RackCDU. 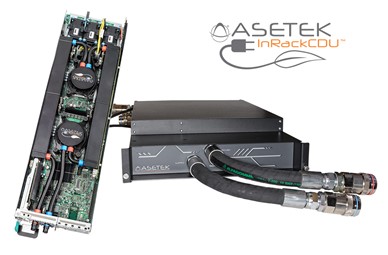 At ISC16, Asetek introduced another RackCDU option. InRackCDU D2C™ provides the option of having RackCDU mounted in the server rack along with the servers themselves. This can be desirable when it is important not to take up any additional aisle space.   Mounted in the top 3U or 4U of the rack (depending on overall heat load) it connects to Zero-U PDU style manifolds at the back of the rack.   While InRackCDU does not take up aisle space, it includes the same functionality and monitoring features as Asetek’s traditional VerticalRackCDU.

In addition to the RackCDU D2C approach, (which removes 60-80% of server heat to a liquid path) both Vertical RackCDU and InRackCDU can be used for 100% server heat removal by liquid & for “room-neutral” installations.   Using the same node-level D2C components

that remove 60-80% of the server heat into liquid and send it to the RackCDU, one can add rack level liquid cooled rear doors from a variety of suppliers.  In this approach, the remaining heat is removed by the rear doors from the air stream at the rear of the rack. 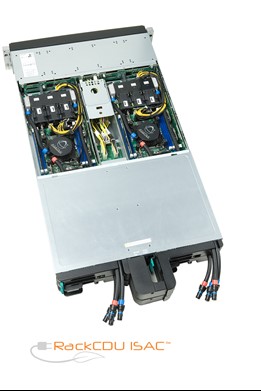 Alternately, removing 100% of the server heat into liquid and transferring it all to the RackCDU can be achieved by using Asetek ISAC (In Server Air Conditioning).  RackCDU ISAC™ enables completely sealed servers and includes D2C coolers for CPU, GPU and co-processor cooling. What makes ISAC unique is the inclusion of in-server heat exchangers that remove the remaining heat from within the server without exchanging air with the data center.

Asetek’s distributed pumping architecture is based on low pressure, redundant pumps and closed loop liquid cooling within each server node. This approach allows for the high level of flexibility in addressing data center needs which is lacking in approaches that utilize centralized pumping. This comprehensive strategy continues to deliver key technologies in the areas of heat capture, coolant distribution and heat rejection. As a result, Asetek provides the flexibility for facilities teams to make the transition to liquid cooling without hesitation.