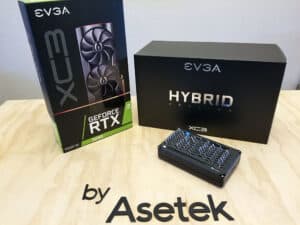 Air vs. Liquid! The debate rages. So today, we’re tackling it head-on by comparing two solutions using one of the most sought-after video cards on the planet, the EVGA RTX 3080 XC3! This card’s triple-fan air solution offers impressive cooling for its type. But we know liquid cooling can take things even further and boost all-around performance considerably.

Now, when it comes to CPU cooling, Air and Liquid solutions each have their devout supporters. Asetek’s official position is obviously “fluid!” However, GPU Cooling is one area where the Air vs. Liquid debate is wholly one-sided. In this case, liquid cooling beats air every time. Sure, roadblocks like PC chassis constraints and the higher cost of liquid cooling are both solid reasons to push you toward more affordable air cooling solutions. But this article will illustrate how liquid cooling your GPU will lower GPU temps, offer quieter operation, and ignite faster/smoother gameplay in your favorite titles? 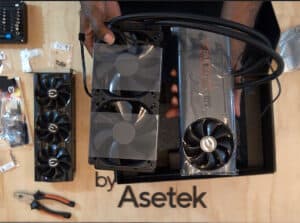 Look, we know component availability is still pretty rough right now. This piece is meant to inform, not flex! We want to arm you with a crucial way to unlock your card’s true potential via liquid cooling. Honestly, no one makes this easier than EVGA. They’re our only partner…or company in general that offers a turnkey AIO liquid cooling kit specifically for their GPUs. As you probably guessed, the liquid cooling tech baked into these kits is powered by Asetek! See how we leverage EVGA’s Hybrid Cooling kit to unlock the hidden potential of the company’s GeForce RTX 3080 XC3 video card. 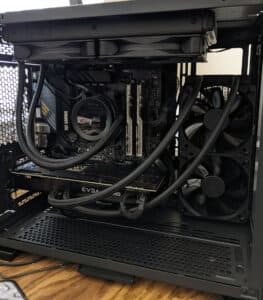 We began by firing up GPU-Z to monitor GPU behavior and performance while running through our host of benchmarks. First up, we dive into UL Benchmarks’ 3DMark test suite.

Here you can see the EVGA Hybrid Liquid Cooling kit keeps a higher average clock speed and higher max clock speed than the stock triple fan air-cooled solution while also maintaining a lower temperature overall. Air cooling sympathizers will remind me of overclocking and controlling the fans, which does help. We launched EVGA’s Precision X GPU management utility and pushed the card as far as it would go before I was plagued with driver crashes and benchmark freezing. I landed on a core clock at +125 /memory clock +650. The I maxed out the power target to 108% and extended the GPU Temp limit from 83C to 91C. This is so the card won’t throttle performance before it exceeds that temperature. I also pushed the fans to 85%, so it never reached 91C, as you can see in the diagram. This achieved mildly increased performance over our default hybrid cooled settings.

Nonetheless, there are just too many trade-offs with air cooling. The average core clock is still higher on the Hybrid Liquid Cooling kit with no overclocking. Plus, it’s running 5dBa quieter due to the increased noise from kicking up the fans to 85% on the air-cooled unit. Pushing the components and fans that hard reduces their lifespan and ultimately that of the card, and no one wants to go GPU shopping these days for obvious reasons.

Port Royal is a graphics card benchmark for testing real-time ray tracing performance. To run this test, you must have a graphics card and drivers that support Microsoft DirectX Raytracing. The test measures graphics card performance with a combination of real-time ray tracing and traditional rendering techniques. The scene features ray-traced reflections, shadows (ray-traced and shadow mapped), glass surfaces with ray-traced reflections, volumetric lighting, particles, and post-processing effects. The rendering resolution is 2560 × 1440.

The Hybrid Liquid Cooling kit beats out the stock air solution by quite a bit in this benchmark. The kit keeps the card nearly 12 degrees cooler on average, allowing the card to hit close to 5% higher core clock performance by default. Overclocked air did a bit better, but again it’s much hotter and still noticeably louder. The numbers show a slight core clock boon from these OC settings, but it’s too negligible to be noticed in games and isn’t worth the stress on your components. 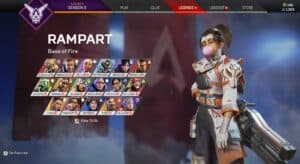 Apex Legends is a DirectX 11 game popular with the eSports community. It’s built using a modified version of Valve Corporation’s Source engine. The development team had previously used the same engine for Titanfall 2. Apex Legends, however, saw several necessary changes to enable the increased draw distances and the larger game map. Apex Legends is believed to be pushing at the technological limits of its game engine and as a result, the game compromises on dynamic display resolution, with the quality of the image and frame rate suffering particularly on console versions and on lower-end PC devices (so you need a “big boy” PC with the GPU cooling to match! -asetek_shawn) Respawn and EA announced the Apex Legends Global Series in December 2019, consisting of several online events and twelve live events during 2020 with a total US$3 million prize pool!

Ok! This is where the rubber meets the road in the Air vs. Liquid drama. All other tests have been synthetic or “canned” ready-made sequences that are repeatable but not quite indicative of real-world gaming. Here we test how well air stock, OC’d, and stock Hybrid liquid cooling setups perform in 35min of sustained gameplay in this DirectX 11 title.

Air-cooled: Thermal throttle is the first thing we notice. The card’s temperature is maxing out the default GPU thermal limit of 83C. The result is we some dips in the core clock that hamper out in-game framerate and frametime/frame pacing.

Air-cooled OC: Our settings mentioned above keep the card below the thermal limit, but not by much. However, 80C+ is still more stress than we want to put on our precious 30-Series NVIDIA Ampere card over a prolonged time. Also, the power draw is at its highest of the three.

Hybrid Liquid Cooled @ Stock: This setup smashed every test here. In-game is exactly where you want your card to perform. I could not be more pleased! The card temperature never reached above 67C (in-chassis ambient = 30C). The average temp was a cool 66C – more than 13-degrees lower than our OC’d setup with continuous 85% fan speed. Pound-for-pound or stock setting vs. stock setting…the Hybrid Liquid Cooled kit was 17-degrees cooler on average than the stock air setup. The core clock is highest here as well. Moreover, the temperature is well within the limit so there is no thermal throttling of the core clock to drop framerates or poorly affect in-game performance. In fact, I can lock the frame rate at 144FPS to match my monitor’s 144Hz refresh rate for some of the smoothest gaming I’ve ever experienced. Sure, you can achieve this on most RTX 3080 cards, but with air cooling, you’re pressing your luck. Plus you can’t do it with the peace of mind that 67C degrees bring. 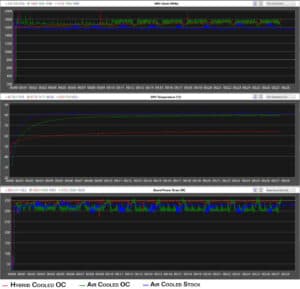 We finally overclocked the hybrid cooled configuration. The Hybrid Liquid Cooled OC results are even more impressive than they look. As suspected, we were able to push the GPU further than our air settings. We settled on core clock +150 / memory clock +725. This gave us an average core clock of 1669 and max core clock of a whopping 2115! Average cooling was a nice 61C and never crept above 63.8C. Meanwhile air stock and air OC reached 83C and 80C respectively. The card drew a massive 375W of power at its max. Yet the 63.8C temperature is a big testament to this AIOs thermal resistance. 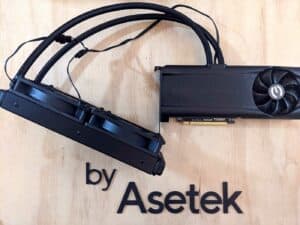 Air vs. Liquid. We’re going to end it right there. We could continue testing, but the story is largely the same. Air is cheap, efficient, and easy to replace when parts fail, whole or in part. Liquid cooling can enhance performance, prolong the lifespan of components while also running quieter. On the CPU front, you can buy towering metal monstrosities that come close to CPU AIO cooling, but aesthetically they are hideous. Moreover, bulky air coolers can damage your motherboard from the added weight they impose. Looking to GPU cooling… Cut loose with full-tilt performance from your EVGA RTX 3080, with the company’s own Hybrid Liquid Cooling kit powered by Asetek!