For the first time in the world WITHOUT the need for costly and energy-hungry external heat pumps.
On 3 February, Asetek’s carbon-neutral data centre will start selling sustainable waste heat to the Aalborg district heating network

SUMMARY: Professor of Energy Planning calls the technology behind the connection ‘an international breakthrough’ that points to significant possibilities in relation to the ambitious climate goals set by the Government and the EU on reduction of CO2 emissions. As things stand, data centres are expected to account for as much as 17% of Denmark’s electrical power consumption by 2030. Both EU and German energy authorities have asked to meet Asetek’s experts several times in recent months to discuss possible climate requirements for data centres. On 3 February, two Danish parliamentary committees will visit the company to watch the Mayor of Aalborg inaugurate the ground-breaking connection. A CO2 footprint on a par with that of worldwide civilian air traffic can be made carbon-neutral in a relatively cost-free way if others opt for similar technology.

Utility company Aalborg Forsyning has recently contracted to purchase waste heat for the municipality’s large district heating network from technology company Asetek’s mini data centre – and what’s more, at a competitive market price. The idea is to demonstrate a sustainable and circular-designed substitute for controversial and highly CO2-emitting coal power. The connection to Aalborg’s district heating system, to be inaugurated and opened on Monday 3 February, has been designed by COWI and built in partnership with LOGSTOR, the world’s leading manufacturer of cutting-edge, energy-efficient and climate-friendly pipe systems for the infrastructure of the future. The highly insulated pipes connect Asetek A/S’s server room on Assensvej in Aalborg East to the Aalborg district heating system beneath the streets.

‘From a district heating point of view, it is extremely interesting that acquiring waste heat from a data centre at an affordable connection cost has proved to be technically viable. It is all the more interesting because it enables us at Asetek to demonstrate that there is actually no need for expensive external heat pumps. The high temperature of the waste heat from Asetek’s data centre makes it especially interesting as an alternative, particularly to fossil fuels, as regards both price and the environment’, says André Sloth Eriksen, founder and CEO of listed company Asetek A/S, speaking about the arrangement.

Although the arrangement between Aalborg Forsyning and Asetek A/S is itself not a big one, it is ground-breaking in several ways, and especially promising when it comes to finding a far more general sustainable solution to the tremendous climate challenges that the future holds, partly as a consequence of the enormous hyperscale data centres that are expected to appear – and are already well on their way both in Denmark and in the EU. The Danish Energy Agency projects that as much as 17%* of Denmark’s electrical power consumption in 2030 will go on running data centres such as the one recently opened by Facebook in Odense and those that Apple and Google are establishing in Viborg and Fredericia, but also smaller-scale industrial and public-sector data centres. At EU level, projections based on Eurostat figures show a corresponding ominous trend. Data centres are already being said to emit more CO2 than worldwide air traffic. With the help of  Asetek’s Liquid Cooling technology, however, the additional energy consumed by data centres can be put to positive, truly carbon-neutral use, because:

At Aalborg University, one of Denmark’s foremost experts in energy planning, Professor Henrik Lund, takes great interest in following the initiative, which supports his own research programme studying opportunities for collaboration between district heating networks and data centres:

‘It is vital for us in Denmark to ensure future data centres are included in ‘green conversion’ in an energy-efficient way. Using the waste heat from data centres for district heating is absolutely key, and Asetek’s technology is especially interesting in this respect. I would describe as an international breakthrough the fact that this demonstrates how a water-cooled server can be directly connected to a district heating supply. More widespread implementation of this and similar energy-efficient technologies requires collaboration between the data centre and district heating industries. We as a university want to be at the forefront of this’, says Professor Henrik Lund.

In recent years, Aalborg Forsyning, which supplies over 100,000 district heating consumers, has intensified its quest for cheap waste heat from several of Aalborg’s largest and most energy-hungry companies for reuse in the district heating system. To be sure, the capacity of Asetek’s own mini data centre, which after all only supplies the data needs of Asetek’s own 100 or so employees, is only a fraction of that of the above-mentioned well-known hyperscale data centres elsewhere in the country. But the fact is that Aarhus, Aalborg and Odense could be fully heated with waste heat from the planned data centres in Denmark, saving a corresponding amount of coal power, if technology like Asetek’s were to be adopted elsewhere.

‘Because the technology is the same, regardless of the size of the data centre – it’s a question of however many hundreds or thousands of servers needing to be cooled as efficiently and sustainably as possible’, notes Asetek CEO André Sloth Eriksen. As a sub-supplier to well-known manufacturers such as Fujitsu, HP and Intel, the company has already sold more than six million water-cooling installations for the processors that are the nerve centre of the growing worldwide market in gaming computers, for example, as well as data centres. But visionary universities and public authorities in the USA and the Far East, too, are already using Asetek’s technology in their data centres and supercomputers – but without sending the surplus heat on to the district heating network, which is usually not yet established there. It is established in Denmark and Europe. Ultimately, it is a question of water-cooling the individual processor in each individual server, rather than quite superfluously cooling the whole of the gigantic data centre hall where the server racks are installed.

Billions of kroner to be saved

In Odense, for example, it took an extraordinary 135 million kroner investment in external heat pumps – paid for by taxpayers/district heating consumers – to get Facebook’s enormous quantity of waste heat up from the 25-30 degrees delivered by traditional cooling to a temperature suitable for district heating.

It is a step in the right direction, of course. For comparison, though, the alternative Liquid Cooling technology developed by Asetek ensures that the waste heat from the company’s own data centre is supplied direct to the district heating network at a temperature as high as 60 degrees – without the need for additional investment in external heat pumps as in Odense. Additional investment such as that at Facebook in Odense makes it less viable to use the heat for district heating – unless the state coffers do without the budgeted tax revenue, which will then have to come from taxpayers by another route. Besides being expensive, heat pumps themselves also consume power, calling into question how big the true CO2 saving is in projects of this sort.

‘Not nearly as carbon-neutral as ours’, notes Asetek’s André Sloth Eriksen. He goes on: ‘For several years, we have noted that data centres have failed to embrace the most efficient technology, while the climate has just been left to expect a CO2 load that became bigger than ever worldwide in 2019. Another reason is the never-ending debate about taxes. Let me make this clear: with our Liquid Cooling technology, taxes, the environment and profitability CAN all live in harmony. The current level of taxation isn’t standing in the way of our solution. We and Aalborg Forsyning are demonstrating that now’, says the Asetek CEO. He goes on:

The new Government and an almost unanimous Parliament have committed Denmark to a 70% reduction in CO2 by 2030, without so far having put forward a plan specifying how. It must be a gift to them that Asetek can deliver 4 of those 70 percentage points in terms of data centres alone, without major social costs and without asking for taxes to be scrapped’, notes André Sloth Eriksen.

‘We are convinced that things like this arrangement with Aalborg Forsyning will make political decision-makers even more aware of what technology can do to protect the climate, and prompt them to set the necessary environmental requirements. Car manufacturers were just sitting on their hands, too, until visionary politicians became aware of the technical possibilities and environmental advantages, and dared to set requirements on things like catalytic converters and particle filters. And now it’s an accepted environmental standard that nobody would dream of debating’, says Andre Sloth Eriksen.

The Mayor of Aalborg, Thomas Kastrup-Larsen, sees good prospects for the country’s third-biggest municipality in the collaboration with Asetek on district heating, and he is looking forward to cutting the ribbon at the opening ceremony:

‘In Aalborg, we try to be as green as possible and to “think circular”. And it could be interesting, in the future, to host a proper full-scale data centre with water-cooling technology like Asetek’s. As a visionary green test centre area, we would very much like to look into the possible ways a collaboration like that could operate’, says Thomas Kastrup-Larsen: ‘There is going to be a cost to turning Denmark into a green and circular economy – no doubt about it. So it is gratifying that, in the Asetek project, the climate can go hand in hand with a solution that benefits both the state and the data centre’, adds the Mayor.

Asetek A/S in Aalborg has been developing ever more energy-friendly CPU water cooling for PCs and servers for more than 20 years, and more recently for data centres as well. Company management have had several meetings in recent months with MEPs and senior officials in the EU’s Directorates-General for Energy and for Climate Action, as well as with the ambitious German energy authority, the UBA, to give an account of the technology and discuss prospects. Both the Business Committee and the Climate, Energy and Utilities Committee of the Danish Parliament will also visit stock-exchange-listed Asetek A/S in Aalborg on Monday 3 February, which is also when the connection will be formally inaugurated.

Photo 1: Asetek CEO André Sloth Eriksen by a server rack in Asetek’s demonstration data centre, which will supply 60-degree hot water to Aalborg’s district heating system from 3 February. Enough to keep 5-7 households fully heated all year round. Note the tubes through which water flows in a closed circuit in and out of the servers. André also holds in his hands one server like those in the rack, with the traditional air-cooling fins replaced with Asetek’s patented Liquid Cooling water pump units (coloured orange). Asetek has now sold over 6 million of these units for PCs, servers, supercomputers and datacentres. Photo: Asetek A/S.

*To provide further information to those interested in the environment, Asetek has set up www.greenerdatacenters.com, which includes short YouTube videos about the vision and the technology. On the site, Professor Henrik Lund of Aalborg University also explains why Asetek’s Liquid Cooling technology is arousing such great optimism about heat recovery in the district heating network. 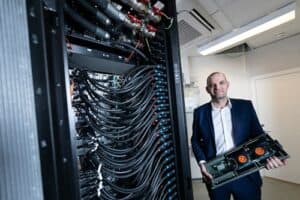 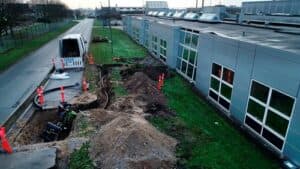